Moving forward to the Drop Head Coupes, it would seem that there are no defined examples of the USA spec "Methods Built" cars. The only models that come to mind are the ACT cars of which some remained as TR7s whilst others were modified to TR8s. A good example of this is the "Hot/Cold weather" test TR8 CHP 533T.

At the commencement of DHC production a number of cars were held back by B.L. for various reasons.

KHP 532V, KHP 533V, KDU 315V and LVC 358V are good examples of the first Californian spec cars to be built in 1979 and could be considered as methods-built. None of these left the UK and were sold off at a later date. All are still on the road and in good condition.

Finally, the UK spec cars were given the go-ahead in 1980.

First were two, what I will call pre-production cars. Both genuine Right-Hand Drive but with USA spec engines of the 10E series. The first, built about April 1980, MHP 404V, was classified as a "Quality Build TR8" and was fitted with a Spider interior. The second, built about July 1980, NWK 988W, was specially prepared for the Lands End to John O'Groats Rally with many upspecced parts added. 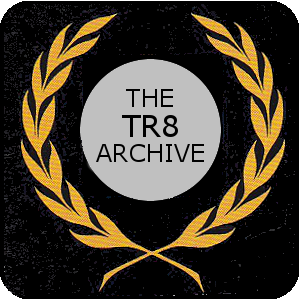